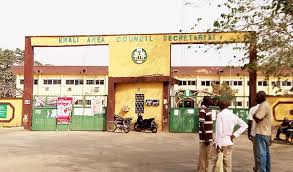 Kwali is an area council in the Federal Capital Territory in Nigeria. Its headquarters is in the town of Kwali.

Kwali is one of the two area councils created from Gwagwalada Area Council on October 1, 1996 by the military administration of General Sani Abacha.

One profession that the people of Kwali Local Government Area are famous for is pottery. Indeed, it is the country home of the world-famous potter woman, Dr. Ladi Kwali whose image currently adorns the 20 Naira bill. Another is cloth making. But today, other professions such as farming, hunting and trading are also practiced by the inhabitants of Kwali Area Council

Like other area councils in Nigeria, Kwali is headed by an elected chairman and is sub-divided into wards. The 10 wards that make up Kwali Area Council are Ashara,

Each Ward is headed by a councillor. But unlike a typical area council in Nigeria, Kwali has a different mode of sub-division into districts headed by district heads.

The Federal Capital Territory Administration (FCTA) has cautioned all the area councils against giving approval for land in any part of the territory without the approval of the FCT Minister.

Director of Development Control Department, gave the warning in Abuja against the background of a recent demolition in the council area.

He noted that all approvals for land allocations in the territory must be endorsed by the FCT minister.

He frowned that some people usually go behind the scene to use the name of area councils to grant or backdate land approvals to unsuspecting residents.