Abuja’s geography is defined by Aso Rock, a 400-metre (1,300 ft) monolith left by water erosion. The Presidential Complex, National Assembly, Supreme Court and much of the city extend to the south of the rock. Zuma Rock, a 792-metre (2,598 ft) monolith, lies just north of the city on the expressway to Kaduna.

At the 2006 census, the city of Abuja had a population of 776,298 making it one of the ten most populous cities in Nigeria (placing eighth as of 2006). According to the United Nations, Abuja grew by 139.7% between 2000 and 2010, making it the fastest growing city in the world. As of 2015, the city is experiencing an annual growth of at least 35%, retaining its position as the fastest-growing city on the African continent and one of the fastest-growing in the world. As of 2016, the metropolitan area of Abuja is estimated at six million persons, placing it behind only Lagos as the most populous metro area in Nigeria.

Abuja is Nigeria’s administrative and political capital. It is also a key capital on the African continent due to Nigeria’s geo-political influence in regional affairs. Abuja is also a conference centre and hosts various meetings annually, such as the 2003 Commonwealth Heads of Government meeting and the 2014 World Economic Forum (Africa) meetings. 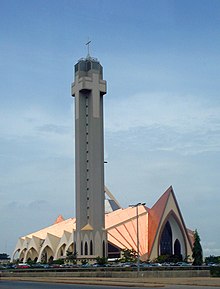 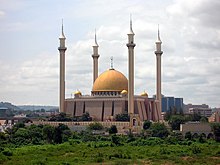 For ease and co-ordination of developmental efforts, the city was divided into ‘Phases’ by its planners, with the city’s development taking a concentric form with Phase 1, which consists of the city’s inner districts-Central Area, Maitama, Asokoro, Wuse, Wuse II, Garki, Garki II, Guzape and Guzape II-at its core spreading out from the foot of Aso Rock, while Phase 5, consisting of the newly created Kyami District covering the vicinity of the Nnamdi Azikiwe International Airport and the permanent campus of the University of Abuja, over 40 kilometres west of Aso Rock. Each Phase is separated from the other by an expressway (some still under construction); for example, Phases 1 and 2 are separated from each other by the Nnamdi Azikiwe expressway, while the entirety of the city proper (Phases 1–5) are enclosed by the Murtala Muhammed (Outer Northern-ONEX and Outer Southern-OSEX) expressways as well as the Federal A2 highway which traverses the Federal Capital Territory on its way to Kaduna (north-bound) and Lokoja (south-bound). Thus there is an integration of the city’s road network with the Federal highway network, providing access to the immediate outlying countryside and the surrounding states of the country i.e. Niger State to the west, Kaduna State to the north, Nasarawa State to the east and Kogi State to the south.

The Phase 1 area of the city is divided into ten districts known as cadastral zones.

There are also sixteen districts in Phase 2.

There are eleven districts in Phase 3.

Real estate is a major driver of the Abuja economy. This correlates with the considerable growth and investment the city has seen as it has developed. The sources of this investment have been both foreign and local. The real estate sector continues to have a positive impact on the city, as it is a major avenue for employment.