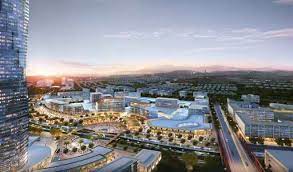 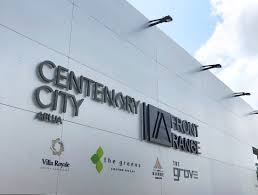 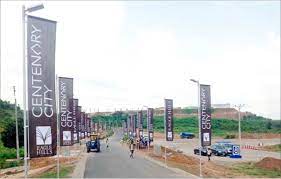 The concept of the city was conceived as a legacy project to mark the 100 year anniversary of Nigeria by January 1, 2014, during the administration of President Goodluck Jonathan. The City will have a mixed-use urban center, a central business district, a financial center, a museum and cultural center to promote African and global arts, world-class hotels, Grade A offices, residential districts, an 18-hole golf course, polo and country club, an international convention center, sports and leisure facilities, a safari Park, educational institutions, healthcare, and community amenities. It is to be private-sector driven.

Centenary City has been declared an Economic City and approved for Free Trade Zone (FTZ) status by Nigeria Export Processing Zone Authority (NEPZA). Centenary City is not the first FTZ to be licensed by NEPZA. There are over 30 FTZ operating in Nigeria approved by the government in order to boost the economy and attract foreign direct investments (FDI) Despite the various controversies trailing the Abuja Centenary City project, the United Kingdom (UK) has said it is ever ready to support Nigeria’s ambition to develop the smart city.

This was disclosed by the UK Prime Minister’s Trade Envoy to Nigeria, John Howell, while commenting on his two-day visit to Nigeria which has already commenced.

According to him, the UK will deploy its expertise in urban planning and transport with the hope to support the Centenary city project.

He said that with a deeper understanding of Nigeria’s technology plans and needs, through a visit to the Abuja Tech Village, the UK will support greater digital access and connectivity in Nigeria.

The envoy added that he will engage Nigerian business leaders and learn about their needs and how British expertise can help their companies grow.

He promised to take forward engagement on ease of doing business and will specifically discuss with Ministers key barriers that impact business; and also explore deeper opportunities inherent in UK and Nigerian partnerships.

He said he will also engage the Nigerian Stock Exchange and encourage continued cooperation between both Stock Exchanges and financial institutions as part of an effort to help grow Nigeria’s capital markets.

Howell said: “I will be visiting the Centenary City and discussing opportunities around Nigeria’s ambition to develop future (smart) cities.

“The UK has substantial expertise in urban planning and transport, which we hope to support commercially in Nigeria via the Future Cities work-strand of the Prosperity Fund.

“I also want to advance my understanding of Nigeria’s plans and needs on technology and innovation and will be visiting the Abuja Tech Village. The UK is keen to support greater digital access and connectivity in Nigeria.”

“I’m looking forward to celebrating the hard work of the Chamber and also engaging with Nigerian businesses and learning about their needs and how British expertise can help Nigerian companies grow.

“On this visit I will take forward engagement on ease of doing business and will specifically discuss with Ministers key barriers that impact business and explore UK and Nigerian partnerships.” 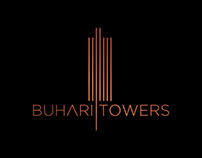 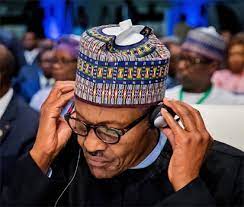 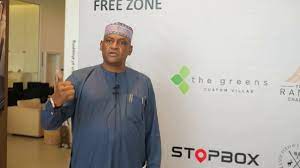 Alhassan Baba Dantata, A local partner, in a briefing yesterday told newsmen that the City is now a reality with the coming up of the Front Range, which is going to invest $18.5 billion for the infrastructure development of the City soon.

He said attracting Front Range, a Dubai Real Estate firm, to fund the project 100 percent is a landmark achievement for the President Buhari administration.

Dantata, who is the major investor for ‘Buhari Towers’, a project in the City, said the towers will host a group of flats for civil servants and low income earners, adding that the entire project will create 250,000 jobs with over 150,000 residents.

He said over N1.2bn was compensation was paid to indigenes and to quarry site operators.

In a statement, its Head of Marketing and Communication, Ahmad Al-Amin quoted the Executive Director of Front Range Properties UAE, Jaimal Shergill saying the project is taking off after “thorough due diligence process.”

Also, the MD of Centenary City Plc, Dr Odenigwe Michael Jnr expressed appreciation to the strategic partners and the Federal Government for their support for the project. The 1,262 hectares project was conceived in 2014 to mark Nigeria’s 100 years of existence as a nation.

Unveiling the initiative in Abuja, a co-investor/ developer, Alhassan Dantata, explained that government has leased the project, while funding is coming from foreign investors.

He stressed that Centenary City was delayed because of controversies, adding that the housing programme was brought on stream with the present pact with the foreign investor.

According to him, immediate past president, Goodluck Ebele Jonathan conceived the idea of Centenary City to commemorate Nigeria’s 100th years of existent as a nation, while Senator Anyim Pius Anyim anchored it.

He said housing project was tagged ‘affordable luxury for the common man’, and every design must be approved from Dubai, adding that there was no development in any country, investors would not be involved.

Dantata also explained that the programme would create 150, 000 direct jobs with additional 250,000 daily jobs for indigenes and will have positive impacts on the housing sector because of the foreign developers’ reputation.

“The two-bedroom unit would go for between N15 and N30 million, and it could be accessed through mortgage facilities, which civil servants could key into.

“It would soon become a dream come true to meet housing needs of Abuja residents.

“It is going to be a Smart city, or mini –Abuja, with $50 million City Gate. The location is a ten minutes’ drive to the airport, and twenty minutes to city centre; made up of Amusement Park, Tourism site, and golf course.

Beneficiaries cut across all strata. It means pay and enjoy your money. House loan scheme is N16 million for civil servants to be deducting from salary. This would enable them pay N30million with electricity, water supply, and security”, he added. On the issue of compensation, he hinted about N1.377 billion have been paid to the indigenes through the minister of FCT, while 475 houses have been built for the landowners in line with Abuja Master Plan. 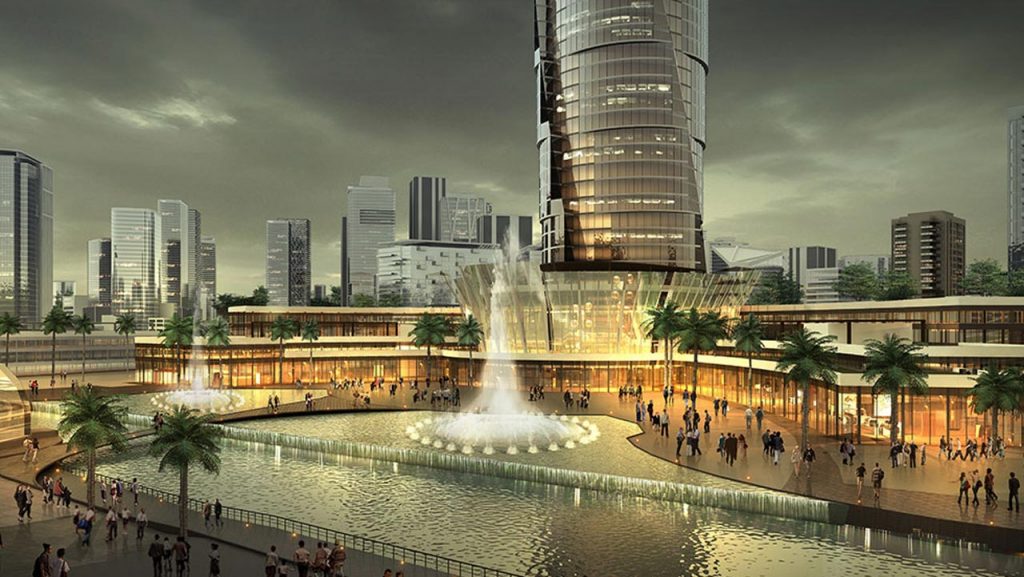 The momentum for housing delivery by private real estate investors, particularly in Abuja, appears to be shifting from the luxury housing range, as developer’s flag-off an iconic tower that would house residential flats for middle-income earners in the Centenary city project.

The project named after President Muhammadu Buhari, called ‘Buhari Tower’ expected to kick-start with the foundation lying ceremony in less than a months time according to officials.

Speaking during the introduction of the Joint Development Foreign Partner, Messrs Front Range FZE by Centenary City Plc, a representative of one of the co-developers, Al-hassan Dantata, explained that naming of the towers after the incumbent President had no political undertone.

He said: “The name Buhari represents the poor people of Nigeria. As a businessman and an admirer of the president, Im only doing this as an honor to the pro-masses vision of president Buhari.”

On his part, Managing Director, Abuja Centenary City Plc, Mr. Okechukwu Odenigwe observed that unlike other Free Trade Zones, the Centenary City would utilise 100 per cent local talents and manpower to implement the project, stressing that the only expatriate for the project is a foreign investor from Dubai.† He said that about 250,000 direct employments would be created from the project.

Odenigwe disclosed that 40 local and foreign investors were pulling resources together to build the City, with $18.76 billion Naira being committed by foreign partners from the United Arab Emirate. He added that the master plan also took cognizance of the environment and existing infrastructure within the location.

He said: “The Centenary Economic City Free Zone is a strategy of the government to diversify the economy of the country. It is a legacy of Nigerias 100 years anniversary and the economic free zone. And it will be built at no cost on government.

With tourism, sport, entertainment and businesses, the city is very critical to Nigeria’s growth as its population is expected to grow more and its part of an idea to preparing the country towards a greater and better future. The City is an economic free zone like Dubai, Qatar, Eko Atlantic City. It shall focus on tourism, leisure and history. And it is regulated by Nigeria Export Processes Zone Authority (NEPZA).

According to him, the centenary city project is the most dynamically committed Free Zone as the investors in the project have already spent over $40million.

“We follow due process in everything about the development of the City. We will also make sure that the green spaces are connected with different bridges linking different areas of the city. The master plan is a living document, which would keep changing as development progresses with a view to accommodating emerging development realities.

“It also takes care of the issue of community services where the interest of surrounding communities is taken into cognisance. This would include the provision of schools from Nursery to Secondary, neighbourhood healthcare and sporting facilities”, he stated.